Tõstamaa (Testama) manor is a source of pride for people of Tõstamaa. The earliest record of Tõstamaa (Testama) manor – a mortgage letter – dates back to 1553 when it belonged to Koonga vakus(a type of taxation and administration unit). An earlier manor house was located on the opposite side of the river from the current one, on the so-called ‘egg-rolling hill’. The construction of the current building began in 1804. In the late 1860s, the manor house was a two-storey stone building boasting tin roof and vaulted basement. The main building was renovated and given its current layout between 1876 and 1877. Tõstamaa manor house has operated as a school since 1921.

The manor house stands out by its details: the facade of the two-storey building features columns with Ionic order capitals. The interior has original architectural features from the 18th and 19th centuries. The oldest part of the building has a partially preserved mantel chimney. The manor house was enclosed by a granite boulder fence, remnants of which are still visible. In 1997, unique ceiling pieces and murals were discovered during the renovation of the main building.

In its heyday, in around 1869, the heart of the manor estate comprised 24 buildings, plus dairy farms, mills and taverns – a total of over 60 buildings. The manor complex included the main building, stables, a coachman’s house, a portico, a greenhouse, a granary and a windmill.

The most interesting of the auxiliary buildings is the 19th century stables complex with its imposing front side. In the centre of the façade is an oats silo. A quadrangle courtyard is surrounded by stables, coach-houses and gun dog kennels. Remnants of end-grain parquet are visible in the stables. On the wall of each stall is an oval manger made from hollowed-out sandstone. The estate had its own manufacturing facilities: a mill, a wool mill, a sawmill as well as starch and spirit factories. The estate operated a lime kiln to produce quicklime and manufactured bricks and wood shingles. Groups of numerous auxiliary buildings were scattered around the park.

Manor estate owners were intellectuals rather than entrepreneurs. The estate was overseen and run by bailiffs of the manor, A. V. Doering and J. Toots. Bailiff Jakob Toots, an ethnic Estonian, was the first in Estonia to start converting a marshy bog into arable land (in 1885). Each bushel area (0.37 ha) of the bog was filled with one thousand wagonloads of sand. The fields are in use to this day and highly praised by farmers.

The area is surrounded by a 15-ha park that is a protected site. In the eastern part of the park, on the other side of a pond, are ruins of auxiliary buildings. The road leading to the school building starts with 3.5 m gateposts.

Tõstamaa manor is estimated to have been established in the Middle Ages. The earliest written record of Tõstamaa manor dates back to 1553. In 1560, Christoph von Münchhausen was granted the fiefdom of Tõstamaa manor estate and the surrounding villages by Magnus, Duke of Holstein. From late 16th century to early 17th century, the estate changed hands a number of times; among the owners were Klaus von Kursell and Richard Isaacson Rosenkrantz. Klaus von Kursell was a son of Tartu Bishop Vogt who served the Swedish king. Richard Isaacson Rosenkrantz is primarily known as the Vice-Governor of Pärnu during the Swedish Rule.

In 1624, Tõstamaa manor estate was gifted to Andres von Koyen, the City Secretary of Riga. Koyen’s daughter, Anna, married Paul Helmersen and, as a result of the union, the estate became the possession of the Helmersen family. The Helmersens descend from Braunschweig-born Paul Helmes. Paul Helmes, father of a future landlord of Tõstamaa manor, who was also named Paul Helmes, moved to Riga some time before 1595. In 1607, he is mentioned as an alderman of Riga. His son, also Paul Helmes (1603-1657), worked in a number of state services and was granted the title of nobility in 1643. In 1651, he changed his name to von Helmersen. Starting from 1653, Paul was mentioned as the hereditary owner of Tõstamaa manor and a number of other manor estates.

The marriage of Benedict Andreas to Anna Meyer von Gyldenfeldt produced 10 sons and three daughters; the ninth son, Heinrich von Helmersen (1690-1754), inherited the estate. The reason why the estate was bequeathed to the second-youngest son could have been that Anna von Gyldenfeldt managed the estate until her death in 1710 by which time most of her older sons had passed away.

Christoph von Münchhausen was a vogt of the Teutonic Order in Western Estonia. During the Livonian War, Münchhausen intervened in political matters as a proponent of the Danish rule and at his instigation the Bishop of Ösel–Wiek sold the Bishopric of Ösel-Wiek to the King of Denmark. The owner of Tõstamaa manor, Christoph von Münchhausen, issued the promissory note to Aloff Hattorff and his heirs. Münchhausen pledged his house in Hottenhausen, Germany, and a few of his German manor estates.

It is estimated that Tõstamaa manor was established in the 13th or 14th century. The earliest written record of Tõstamaa manor dates to 1553. From that time to the nationalisation of the estate in 1919, Tõstamaa manor estate had several different owners, members of the Baltic German nobility.

Nobility was an inherited privileged status in medieval Europe, deriving from land ownership or granted in exchange for allegiance and various, mainly military, services to a suzerain. Based on that prototype, a subsequent form of the societal group and analogous earlier strata of society are also called the nobility.

1560 – late 16th century – Christoph von Münchhausen was granted the fiefdom of Tõstamaa manor estate and the surrounding villages by Magnus, Duke of Holstein, in 1560. Münchhausen was a vogt of the Teutonic Order in western Estonia.

1624 – first half of the 17th century – in 1624, the manor was gifted to Andres von Koyen, the City Secretary of Riga. Koyen’s daughter, Anna, married Paul Helmersen and the estate was transferred to the possession of the Helmersen family.

First half of the 17th century – 1831 – for nearly a century, Tõstamaa manor estate was in the possession of the Helmersens. In 1831, the Helmersens sold the estate at an auction to the Staël von Holstein family. Allegedly, the Helmersens sold the estate due to financial difficulties caused by litigation with Kiraste Hans (Hans of Kiraste). Hans had built a mill to grind grain for local farmers, but the landlord objected and the mill was demolished. Not accepting such injustice, Hans took the case to court. The litigation dragged on for so long that the landlord fell into financial hardship. It is said that Kiraste Hans went missing without trace. 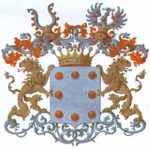